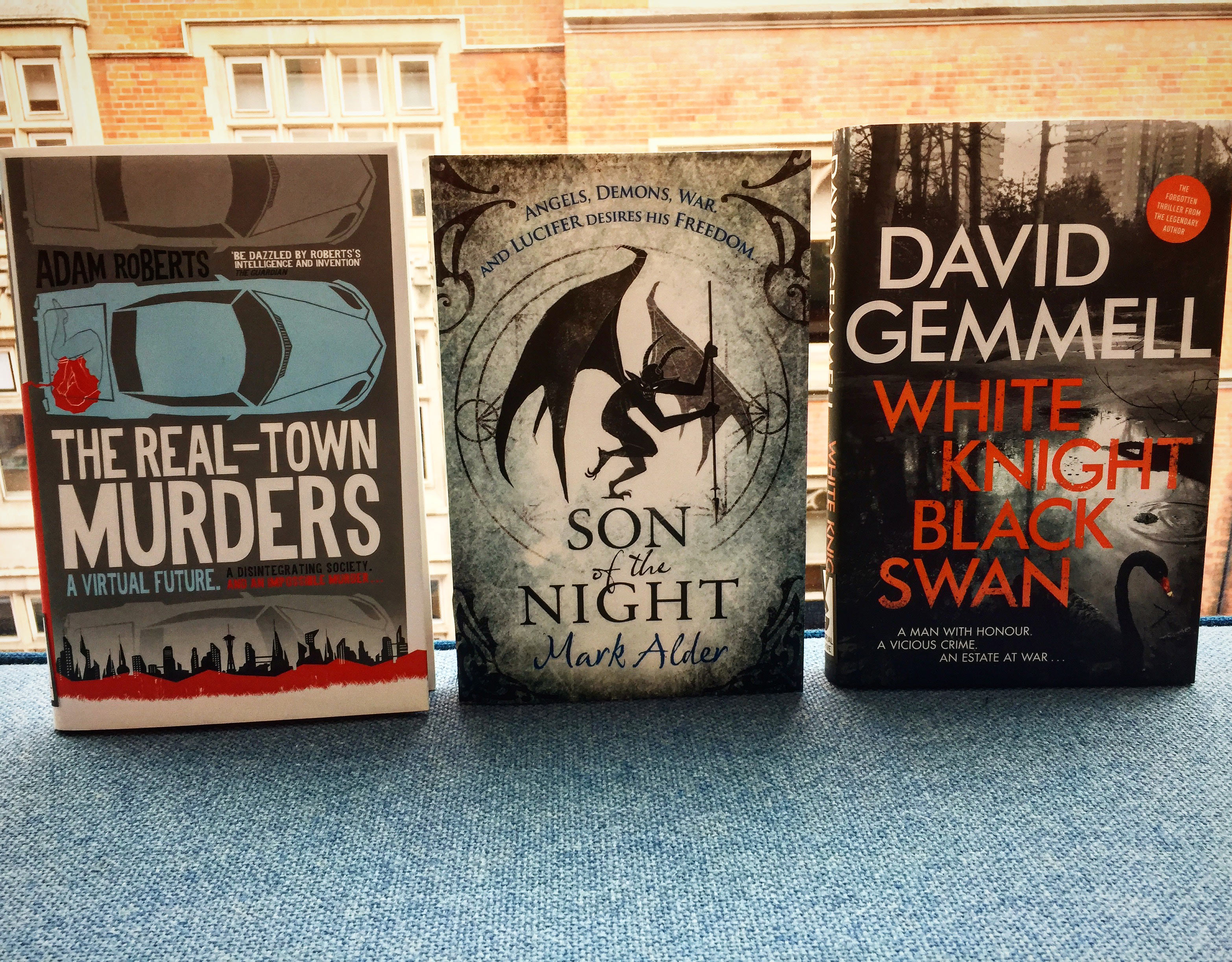 Alfred Hitchcock once said that ‘Drama is life with the dull bits cut out’, and this week we can promise you all the drama, none of the dull stuff. We have Adam Roberts’ latest, a Hitchcockian murder mystery that’s more about the how than the who. A crime book from the legendary David Gemmell that you probably never knew existed. Plus Mark Alders’ ‘What if God and the devil decided to get involved in A Game of Thrones’-esque historical wonder. Enjoy!

The Real-Town Murders by Adam Roberts

An impossible murder. A ticking deadline. A political coup. A Hitchcockian thriller set in a chilling near future.

Alma is a private detective in a near-future England, a country desperately trying to tempt people away from the delights of Shine, the immersive successor to the internet. But most people are happy to spend their lives plugged in, and the country is decaying.

Alma’s partner is ill, and has to be treated without fail every four hours, a task that only Alma can do. If she misses the five-minute window her lover will die. She is one of the few not to access the Shine.

So when Alma is called to an automated car factory to be shown an impossible death and finds herself caught up in a political coup, she knows that getting too deep may leave her unable to get home.

What follows is a fast-paced Hitchcockian thriller as Alma evades arrest, digs into the conspiracy, and tries to work out how on earth a dead body appeared in the boot of a freshly made car in a fully automated factory.

A stunning, long-lost and highly sought-after crime novel by the legendary David Gemmell returns to print after twenty-five years.

White Knight Black Swan was Gemmell’s only published crime novel, released under a pseudonym. Building on the world Gemmell saw around him while working as a local journalist in eighties London, it shows a way of life now long gone.

‘Bimbo’ Jardine is a special man – a giant with a heart of gold, generous to his friends, feared by his enemies. His job is to collect money for Reardon, the local gangster, but everyone in this patch of South London knows him to be an honourable man, despite his capability for violence. But when Bimbo stops a homophobic attack, and then takes on the man who ordered it, he sets himself on a collision course with his own boss. Reardon cannot be seen to back down. Bimbo believes he did the right thing and won’t step away.

And when the two men clash, other lives will be at risk.

Son of the Night by Mark Alder

The 100 Years’ War reaches the bloody slaughter of Crecy as Angels and Demons fight for the future of Man, in a series for fans of George RR Martin and Bernard Cornwell alike.

Following on from the success of Son of the Morning, which saw him compared to both Bernard Cornwell for the flair of his historical writing and to George RR Martin for his gripping plotting, Mark Alder takes his history of the 100 Years’ War into France as the war between Heaven and Hell swallows up the ambitions of both the French and English crowns.

As the armies mass around Crecy the rivalries between Lucifer, Satan and God become ever deeper and more violent. Combining a cast of larger than life (yet real) characters and a truthful, deeply researched take on the religious beliefs of the time, Mark Alder has embarked on a truly unique historical fantasy that will ensure you never see the 100 Years’ War and the history of medieval Europe in the same way again.

Out now in trade paperback and ebook.