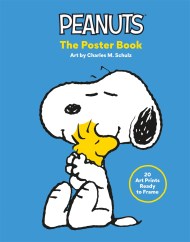 Celebrate the classic art of Charles M. Schulz's Peanuts with this unique collection of twenty images, beautifully printed and ready to remove for framing. Whoever…