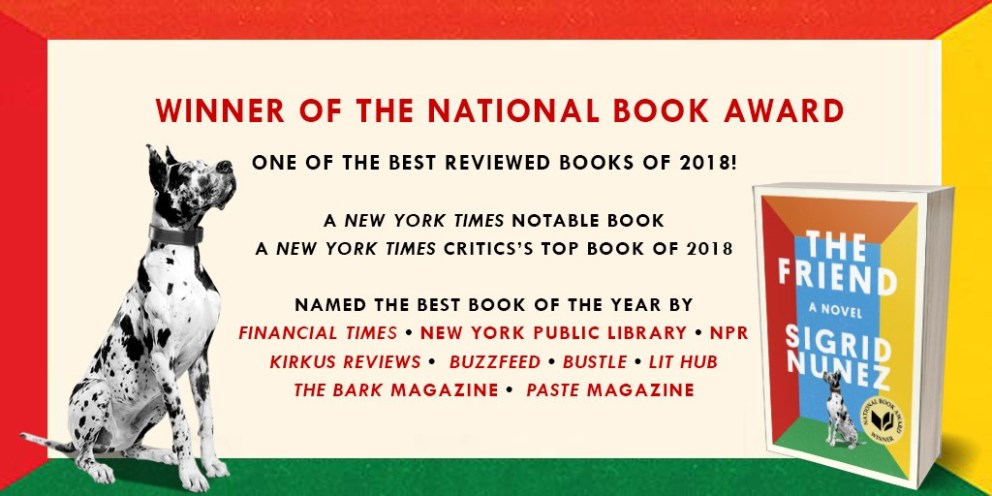 When a woman unexpectedly loses her lifelong best friend and mentor, she finds herself burdened with the unwanted dog he has left behind. Her own battle against grief is intensified by the mute suffering of the dog, a huge Great Dane traumatised by the inexplicable disappearance of its master, and by the threat of eviction: dogs are prohibited in her apartment building. But while troubles abound, rich and surprising rewards lie in store for both of them.

Praised by The Wall Street Journal as ‘a beautiful book . . . crammed with a world of insight into death, grief, art, and love,’ and by Marie Claire as ‘
a poignant reflection on loss and companionship,’ The Friend is a stunning meditation on loss and a celebration of human-canine devotion.

[I]t’s all about the rhythm, you said. Good sentences start with a beat.

An extract from The Friend

During the 1980s, in California, a large number of Cambodian women went to their doctors with the same complaint: they could not see. The women were all war refugees. Before fleeing their homeland, they had witnessed the atrocities for which the Khmer Rouge, which had been in power from 1975 to 1979, was well known. Many of the women had been raped or tortured or otherwise brutalized. Most had seen family members murdered in front of them. One woman, who never again saw her husband and three children after soldiers came and took them away, said that she had lost her sight after having cried every day for four years. She was not the only one who appeared to have cried herself blind. Others suffered from blurred or partial vision, their eyes troubled by shadows and pains.

The doctors who examined the women—about a hundred and fifty in all—found that their eyes were normal. Further tests showed that their brains were normal as well. If the women were telling the truth—and there were some who doubted this, who thought the women might be malingering because they wanted attention or were hoping to collect disability—the only
explanation was psychosomatic blindness.

In other words, the women’s minds, forced to take in so much horror and unable to take more, had managed to turn out the lights.

This was the last thing you and I talked about while you were still alive. After, only your email with a list of books you thought might be helpful to me in my research. And, because it was the season, best wishes for the new year.

There were two errors in your obituary. The date you moved from London to New York: off by one year. Misspelling of the maiden name of Wife One. Small errors, which were later corrected, but which we all knew would have annoyed the hell out of you.

But at your memorial I overheard something that would have amused you:

I wish I could pray.
What’s stopping you?
He is.

It’s true that if you cry hard enough for long enough you can end up with blurred vision.

I was lying down, it was the middle of the day, but I was in bed. All the crying had given me a headache, I’d had a throbbing headache for days. I got up and went to look out the window. It was winter yet, it was cold by the window, there was a draft. But it felt good—as it felt good to press my forehead against the icy glass. I kept blinking, but my eyes wouldn’t clear. I thought of the women who’d cried themselves blind. I blinked and blinked, fear rising. Then I saw you. You were wearing your brown vintage bomber jacket, the one that was too tight—and looked only better on you for that—and your hair was dark and thick and long. Which is how I knew that we had to be back in time. Way back. Almost thirty years.

Where were you going? Nowhere in particular. No errand, no appointment. Just strolling along, hands in pockets, savoring the street. It was your thing. If I can’t walk, I can’t write. You would work in the morning, and at a certain point, which always came, when it seemed you were incapable of writing a simple sentence, you would go out and walk for miles. Cursed were the days when bad weather prevented this (which rarely happened, though, because you didn’t mind cold or rain, only a real storm could thwart you). When you came back you would sit down again to work, trying to hold on to the rhythm that had been established while walking. And the better you succeeded at that, the better the writing.

Because it’s all about the rhythm, you said. Good sentences start with a beat.

The Friend is available in paperback, ebook and audio editions. To learn more, visit littlebrown.co.uk