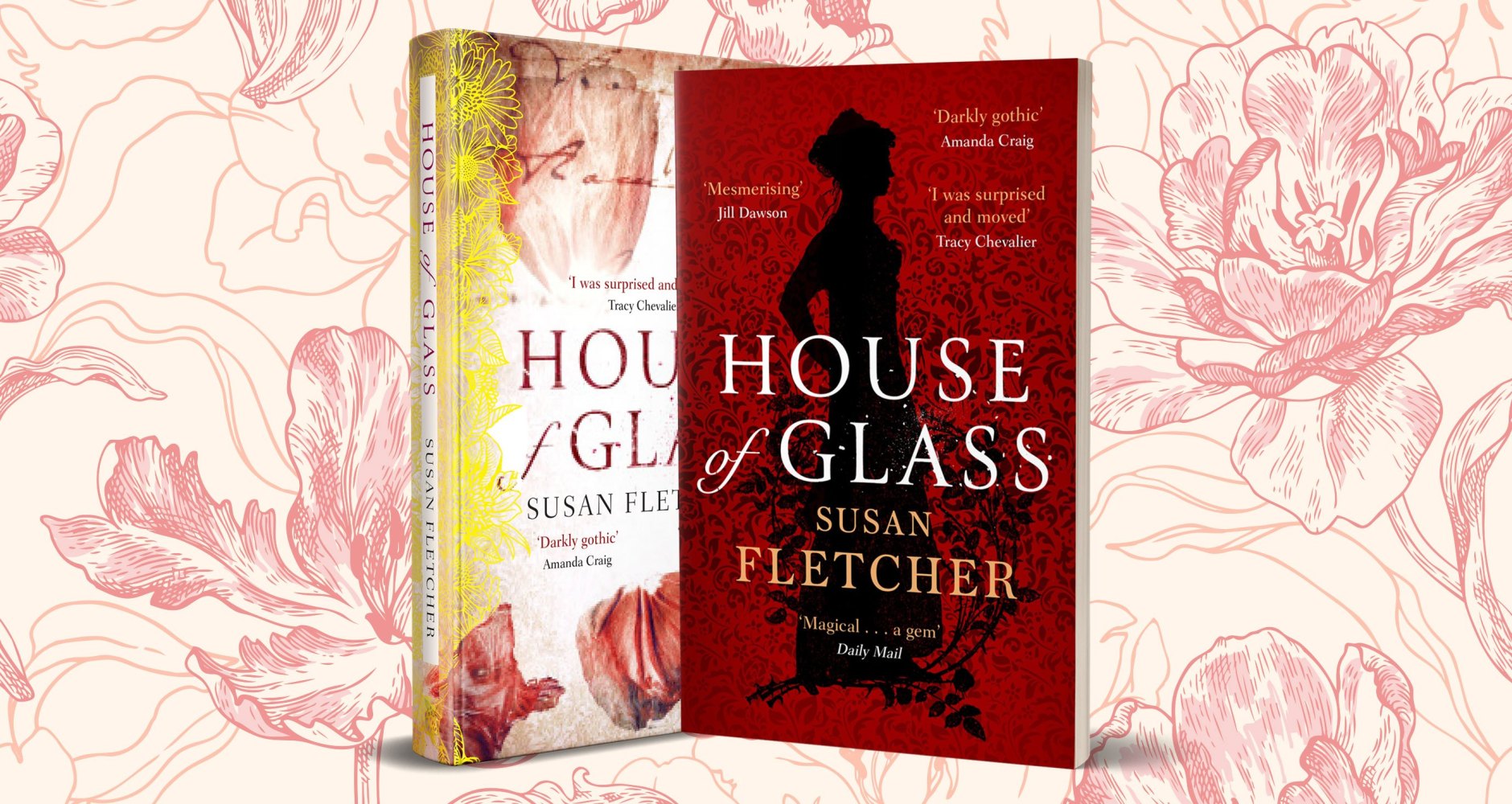 House of Glass by Susan Fletcher

June 1914 and a young woman – Clara Waterfield – is summoned to a large stone house in Gloucestershire. Her task: to fill a greenhouse with exotic plants from Kew Gardens, to create a private paradise for the owner of Shadowbrook. Yet, on arrival, Clara hears rumours: something is wrong with this quiet, wisteria-covered house. Its gardens are filled with foxgloves, hydrangea and roses; it has lily-ponds, a croquet lawn – and the marvellous new glasshouse awaits her. But the house itself feels unloved. Its rooms are shuttered, or empty. The owner is mostly absent; the housekeeper and maids seem afraid. And soon, Clara understands their fear: for something – or someone – is walking through the house at night. In the height of summer, she finds herself drawn deeper into Shadowbrook’s dark interior – and into the secrets that violently haunt this house. Nothing – not even the men who claim they wish to help her – is quite what it seems.

Reminiscent of Daphne du Maurier, this is a wonderful, atmospheric Gothic page-turner.

There is nowhere like this. I had seen nothing of the world but I felt sure of that. I fingered the metalwork of the gate which led to the beechwoods; I stood beneath the cedar of Lebanon, looked into the dark cavities of branches to where woodpigeons roosted and stared back. And I entered a courtyard of light to find topiary trees within it; four shapes of privet which had, once, been birds but they were less birdlike now. Time had lengthened their feathers. Wind and drought and English rain had hollowed them – yet they retained a sense of themselves. And I liked them for this, as I circled them. Imperfect, yet they had endured.

A tennis court. A dark, thatched tennis pavilion in which the furniture had rusted.

An orchard, too – which seemed forgotten entirely, lost to long grass and buttercups, except for a narrow track. At its end, I found a rectangular mound of earth – which suggested disturbance or burials. But there was no stone to mark the place.

And lastly, there was the kitchen garden. This formed, perhaps, a quarter of Shadowbrook’s land: a flat, exposed plain on which there were bean frames of hazel, rhubarb forcers of terracotta and row after row of leafy tops which rustled in breezes. I would come to know this part well. Here, I would receive a handful of potatoes to carry to the house; here, I’d find the garden boys. But for now, there was only me and the vegetables. Each crop announced itself with a small wooden stick on which I’d read such names as Scarlet Emperor, Black Beauty, British Queen, Globe. And whilst I was alone in it, there was evidence of recent human work. Footprints in the earth. Hoes propped against tool sheds. A spade, planted into the ground as a tree might be. And I had a curious sense of being watched; throughout the garden, I had felt it. I’d felt that I’d enter a part of it – the orchard, the lime bower – at the very moment that someone else had risen and left; I felt that any metal chair might retain that person’s heat. It was an unsettling notion. I chastised myself for it – it was foolishness – yet I also looked down the lines of hedges. On the croquet lawn I turned in a slow, complete circle to see it all.

Later, in the kitchen, I mentioned this to Mrs Bale. ‘I felt watched in the gardens. Do you have that, too?’

I asked, too, when Mr Fox might be returning to Shadowbrook. ‘Because I want to ask him about his gardens. How old are the beechwoods? Who painted the Roman faces? And’ –

‘Speak to Hollis.’ She said this too quickly. But then she softened, retrieved her smile and repeated this in a brighter, nonchalant voice. ‘Hollis – not Mr Fox. Hollis has been here for such a long time that he’s the man to speak to. He’s the man who knows.’

A quiet, uninhabited garden. Yet the following day, it altered: I woke to hear a low, male whistling. On dressing, I discovered the gardens were brimming with noise. The garden boys: they arrived by nine every day except Sunday. And whilst I could not see them yet – (in the vegetable garden, Harriet said; they always started there) – I stood by the kitchen door with my teacup and listened. Names were thrown like balls. Orders were given and seemingly ignored – and I heard a yell that suggested that a fist had been thrown, or something taken.

I partly wished to follow these sounds. To investigate. But I was also reluctant. It was not that I knew nothing of boys: knowing nothing of them – having never met one – was only more reason to venture forwards and watch them, introduce myself. Rather, I was wary of their physicality. I heard the clang of metal – spade against spade. One of the bright, laughing protestations was get off me – and on hearing it, I considered the bruise on my wrist which was finding new depths of blue. It seemed too soon to meet them.

I chose to find Hollis instead. The Shadowbrook gardener for four decades, who had carried my trunk to my room on my arrival without order or complaint. He’d had, it seemed, a lifetime in this place. And I looked, therefore, for a man who seemed to belong in these gardens: stooped, from years of barrowing. Skin like bark. Hair with the hue and texture of a dandelion clock.

This was precisely him. I found Hollis beneath a magnolia tree. His movements announced him to me: there was a neat, rhymical sound to his spade with, at times, a tuneless hum. And he worked slowly, with care and exactitude that, I supposed, a head gardener would. Also, he seemed entirely absorbed in his task; he’d place his foot on the spade’s uppermost edge, push his weight down so that the spade sunk and, having done this, he’d remove his foot, bend his knees, alter his grasp on the handle and lift the spade as if the earth was sleeping and he had no wish to wake it. I thought, he has always done this. Around him, a robin burred for worms.

‘Are you Mr Hollis?’

He straightened. ‘Ah! I’d heard you’d come. Yes, that’s me – although I can’t remember the last time my title was used. I’ve been plain Hollis all my life – to the neighbours, to friends. To my wife, even.’ He planted the spade into the earth like a flag. ‘I rather think you have a much finer name.’

‘Waterfield? Isn’t it? Yes, much finer. To my mind, that’s a gardener’s name.’

‘Too long? Plants have far longer and are perfectly suited to them.’ With this, he reached into his pocket and retrieved a handkerchief. He dabbed his nose with care. ‘Well, Miss Waterfield. I hope you are settling in?’

‘Yes. People seem kind enough. And these gardens are …’

Hollis smiled. ‘You like them? There’s nowhere I love more. I took my first steps in the orchard, or so I’ve been told. Since then, I’ve seen saplings grow into huge trees. I remember my father planting these hedges and look at them now. It feels like no time has passed at all, of course.’ He folded the handkerchief, sniffed once.

‘Your father gardened here too?’

‘He did. He was the gardener for the Pettigrews for over fifty year and his father had the job before him. My earliest memory is of watching my grandfather sweeping the leaves on the veranda. He died that same winter.’

‘The Pettigrews. They lived here?’

‘Yes, they did. For years. The last of the Pettigrews died in 1901 – and since then … Well, there was no proper ownership of the place until Mr Fox. You’ll have heard.’

‘Mrs Bale said the house had been abandoned.’

‘Abandoned?’ Hollis considered this. ‘Too strong a word, I think. But I suspect you’ll have already marked that Mrs Bale is fond of a tale. No, not quite abandoned. But neglected, certainly. A distant relative of the Pettigrews would come and go from time to time, during those years – I met him, on occasion – but he never stayed for long. A week or two a year, maybe. He sold it to Mr Fox, in the end. I hear you’re from London?’

But I was confused by this. ‘So the house was neglected in that time and yet the garden was not? That makes no sense.’

‘Ah. When the last of the Pettigrews died there was an understanding – a provision in the Will – for a gardener to stay at Shadowbrook. Your expression, Miss Waterfield! Quite a thing, I know. The garden was always to be cared for – even if the house crumbled to dust. It suited me well, of course. Mind you, it has always been too large a garden for a single man. Even when my son helped me, we could not care for it all.’ He paused. ‘Albert’s my boy. He works here, too. You’ll see him – tall.’ He raised his hand above me to say this tall.

‘Thirteen years of just you and Albert? In the garden?’ I sifted this information. It seemed extraordinary – that a garden might be cared for whilst the house itself became a home for crows and dead leaves. ‘Did no-one see your efforts at all? It seems a waste.’

‘Not a waste. We saw our efforts – Albert and I. We saw the bulbs come up in the spring. We maintained a vegetable patch.’ Hollis seemed bemused. ‘Mrs Bale told me you had a rather forthright manner to you. I think she was right.’

Forthright. I straightened a little. ‘Why forthright? I like knowing things, that’s all. I think it’s a shame not to know what one can. Mr Fox bought the house, after that?’

‘He did. Employed the garden boys. Provided tools and paid us well.’

‘He must love the gardens. Do you see him often?’

Hollis looked at his right hand. He opened and closed it slowly, as if the spadework had left a pain there. ‘I should introduce you to Albert, Miss Waterfield. We think we’ve raised quite a fine, honest lad, his mother and I. We’ve an elder boy too, but he’s married and lives in Moreton now so we don’t see him often.’

An insufficient reply. Perhaps he had misheard me. But perhaps, too, it was an aversion, a step away from what I wished to know.