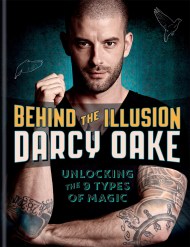 Darcy, a thrilling Canadian illusionist, won the coveted People's Choice Award in Seattle and performed at the Magic Castle in Hollywood before he was legally…