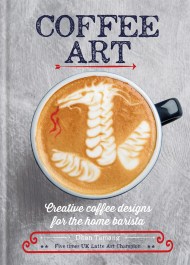 Over 128 pages of 60 stunning designs from Britain's champion latte artist. From free pouring to etching, stencilling and more complicated designs for the black…