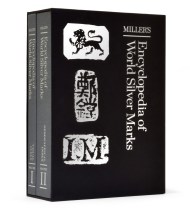 Designed as the essential reference tool for appraisers, collectors and dealers of silverware, the Encyclopedia is an indispensable guide for anyone researching silver hallmarks, offering…