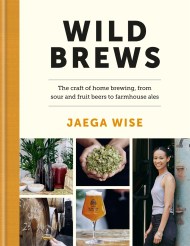 Produced using a mixture of naturally occurring yeasts and bacteria, wild fermented beers offer the 'fine dining' of the beer world. These beers are how…