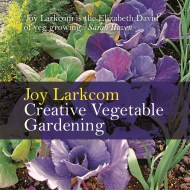 Joy Larkcom believes passionately that a vegetable garden, whatever its size, can be as beautiful as a conventional garden of flowers and shrubs. In Creative…