Kerry Daynes, leading forensic psychologist, takes us into the murky world of psychological investigation to uncover what lies buried. Each of her clients is classed… 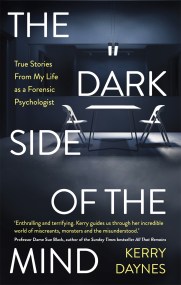 The Dark Side of the Mind

'Enthralling and terrifying. The Dark Side of the Mind is a chilling glimpse into a world of miscreants, monsters and the misunderstood.' Professor Dame Sue…