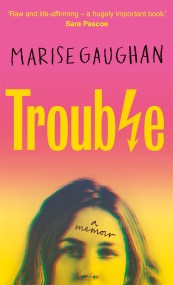 *** '...a story of profound, shocking loss and its ramifications... full of smart, dark humour... a compelling read... But it is also a story of…