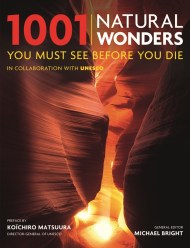 Let Michael Bright take you on an incredible journey to the most spectacular natural wonders in the world. Spanning every continent and ocean on the…