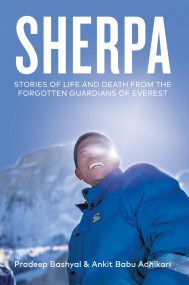 Changing the narrative of mountaineering books, Sherpa focuses on the people who live and work on the roof of the world. Amid all the foreign…