Ever since I moved to the UK, I’ve come to realise that cabbage has a bad reputation here. The quintessential symbol of bad and smelly Eastern European cuisine, this nutrient-rich brassica is generally named as the main reason why some people dislike or are not keen to try Russian food. Well, I am here to dispel this stereotype. I absolutely love cabbage in all its guises (yes, even the scent of boiled cabbage makes me go ‘yum!’), from borsch and shchi soups, to sauerkraut and, of course, stuffed cabbage leaves. Known across Eastern Europe and Russia as ‘little pigeons’, golubtsy are widely consumed in most households. But despite their popularity, they are quite a time-consuming dish to create. So I’ve decided to make this crustless cabbage pie instead, a sort of a ‘golubtsy for the lazy’. As I’ve since discovered, there are similar dishes in Balkan and Hungarian cuisines – what can I say, there is a lazy cook in all of us. What I particularly like about this version is that you can combine different flavours and add as many layers as you like, adhering to the old Russian tradition of multi-tiered savoury pies. Serve it with this bacon and rye crumb, and then try telling me you don’t like cabbage!

mild vegetable oil, for frying and oiling the baking tin

For the crumb (optional)

In this cake the cabbage leaves play the part of pastry, so we will need to peel them off first. In order to do that, cut off the stem base and braise the cabbage, intact, in a pot of salted boiling water for 10–15 minutes.

While the cabbage is braising, prepare the fillings. To make the meat mixture, heat up a tablespoon of oil in a medium-sized saucepan and fry the onion, carrot, half the garlic and the dill over a medium heat for 8–10 minutes. Add the minced beef and fry for 5–8 minutes until the meat is cooked throughout and begins to turn golden, adding a splash of water if it starts to catch too much. Then stir in the tomato purée and measured hot water to create a rich sauce, and season it with salt and pepper to taste (2 pinches of each should be enough), followed by the sugar and all the spices. Cover the pan with a lid and simmer the filling over a low heat for 10–15 minutes.

In the meantime, make the mushroom and rice mixture. Heat up a frying pan and cook the mushrooms with a tablespoon of oil, a good pinch of salt, the remaining garlic and the parsley over a medium heat for 5 minutes, covered, until the mushrooms have released their juices. Remove from the heat, then add the rice and mix through, along with a few tablespoons of hot water if the mixture feels too dry.

By this point your cabbage should be ready. Drain and let it cool for a few minutes before starting to peel off the leaves. A medium-sized cabbage usually yields around 20 medium-sized leaves.

Meanwhile, preheat the oven to 180°C fan/Gas Mark 6. Oil a round springform tin and cover the base and sides with a layer of cabbage leaves as neatly as you can. The leaves should be supple and mould into the springform tin quite easily. Start building your tiers by adding a layer of the meat mixture (the amount will depend on the size of your tin), followed by a layer of cabbage leaves. The next tier will be made up of the mushroom and rice mix, followed by a final layer of the cabbage leaves to seal the cake. If the tin you are using is smaller in circumference but quite deep, you can keep going until you have run out of the fillings and cabbage leaves.

Brush the pie with oil and cook in the oven, uncovered, for 20–30 minutes, until the leaves become crisp in places. Let the pie cool down slightly before opening the springform tin ring and carefully sliding the pie onto a plate or a wooden board.

To make the crumb, heat up the oil in a frying pan and fry the pancetta or bacon over a medium heat until all the fat has melted and the meat begins to caramelise. This should take 10–15 minutes. Add the garlic and rye bread cubes and fry for a further 5 minutes until the bread soaks up the fat and start to crisp up. The mixture should be crisp enough to be blitzed into a crumb without turning into a paste. You can either use a good food processor to crumb the mixture, in which case you will need to pulse it for about 30 seconds, or simply chop it up with a knife until it reaches a fine, crumbly consistency.

Serve the pie with a side of bacon and rye crumb and a bowl of soured cream (feel free to sprinkle extra crumb on top of the soured cream too).

Recipe extracted from Salt & Time: Recipes from a Russian Kitchen by Alissa Timoshkina 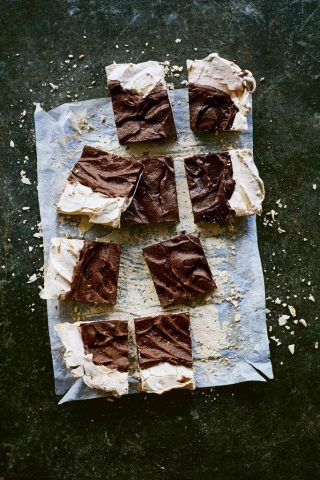